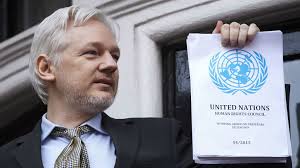 On January 4, 2021, a British judge ruled to block the US extradition oin WikiLeaks publisher Julian Assange on grounds that medical evidence that his Autism Spectrum Disorder, combined with his psychiatric history and the prospect of US imprisonment resulted in a high likelihood of suicide.

The United States is attempting to extradite Assange in order to prosecute him for publishing evidence of war crimes in 2010. For almost two years, Assange has been detained in London’s highest security prison — HMP Belmarsh — as he fights extradition.

The U.S. Justice Department is requesting extradition on charges that legal scholars testified would “radically rewrite the First Amendment” by criminalizing the soliciting, possession, and publishing of government information, regardless of its public interest value. If sent to and tried in the United States, a conviction would be all but guaranteed, as Assange would not be allowed to argue in court that his actions were justified. For publishing stories that won numerous journalism awards, Assange faces up to 175 years in prison.

Assange’s hearing focused on three main arguments: that the indictment of Assange is an unprecedented and dangerously overbroad attempt to criminalize basic journalistic activity; that the prosecution — which Obama declined to introduce and which the media-hostile Trump made its “priority” — is politicized; and that sending Assange to the US, when he has Asperger’s syndrome and clinical depression and where experts testified would most likely be placed in solitary confinement in a Supermax prison for the rest of his life, would endanger his life and put him at grave risk of suicide. The judge accepted this last point.

The magistrate delivered a lengthy decision recounting the US government’s claims, the defense’s responses, and which aspects she agrees with before ultimately ruling on whether to approve the extradition request.

It is important to note that the UK magistrate makes no findings of fact. US prosecutors arguments are presumed to be true, and the defence cannot cross-examine those claims.

Appeal process after the High Court

How long could it take?

If President Biden decides to drop the charges, in keeping with Obama’s policy not to prosecute Assange and grant clemency to Chelsea Manning, Julian Assange will immediately walk free.

If the High Court rejects the US request to appeal, Julian Assange could walk free within weeks.

If the final decision comes from an appeal at the High Court, it will most likely be a matter of months.

If the case goes through each stage of appeal to the European Court, the process could take several years.

The indictment and extradition request for Assange raises grave and extraordinary concerns for press freedom:

There has been widespread concern expressed by international organisations and media organisations across the political spectrum about the free speech implications of the extradition and prosecution of Assange.

By way of example:

”This sets an extremely dangerous precedent for journalists, media​ ​organizations and freedom of the press” ​(International Federation of Journalists (IFJ) is the global journalists’ union)

​“This case now represents a threat to freedom of expression and, with it, the resilience of American democracy itself.”

Possibility of a Presidential Pardon

There has been widespread reporting and public discussion about whether the incoming US president will put an end to this extraordinary prosecution. Biden could issue a preemptive pardon, or he could simply drop the indictment and extradition request. Assange’s defence team have laid out extensive reasons for them to do so given the implications for press freedom. There is a time sensitive political opportunity for the US to resolve this case and avoid the catastrophic implications for press freedom – in the US and in the UK, and around the world. Pardon Application in link.

Prison Conditions in the UK

Assange remains detained in HMP Belmarsh, a high security prison. There have been constant issues with his prison conditions, which have been compounded by the further restrictions imposed during the COVID pandemic. There have been 97 cases of COVID in Belmarsh alone, with several deaths reported. There is currently a COVID outbreak in Assange’s prison block, where he is at serious risk of contracting COVID and suffering serious medical complications because of his existing respiratory issues.

For example, before COVID, his legal team reported:

Since COVID, his situation in prison has become more difficult, including:

The judge refused a bail application made in early 2020 despite the concerns raised by Assange’s lawyers in relation to the risk of COVID in prison and his ability to properly prepare his defence. Since her decision, there have been several COVID related deaths at Belmarsh prison. After winning his case at the Magistrates Court on 4 January, Assange applied for bail. Bail was refused in spite of the ruling in his favour in relation to US extradition.