Julian Assange’s father John Shipton has recently returned to Australia from his son’s extradition hearing at the Old Bailey in London.  Julian has been detained by the U.K. on behalf of the U.S. for 10 years thus far.

Julian & WikiLeaks are being punished for exposing U.S. war crimes in Afghanistan & Iraq.  The U.S. are threatening to imprison him for life under their draconian Espionage Act.  Julian, a Queenslander is being presently held in the British supermax Belmarsh Prison where the Covid virus is running rampant.

Please join us and Julian’s dad John Shipton on International Human Rights Day to call for an end to this travesty! 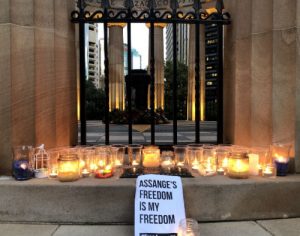 RALLY to stop the extradition of Julian Assange to the U.S. and Bring Julian Home!