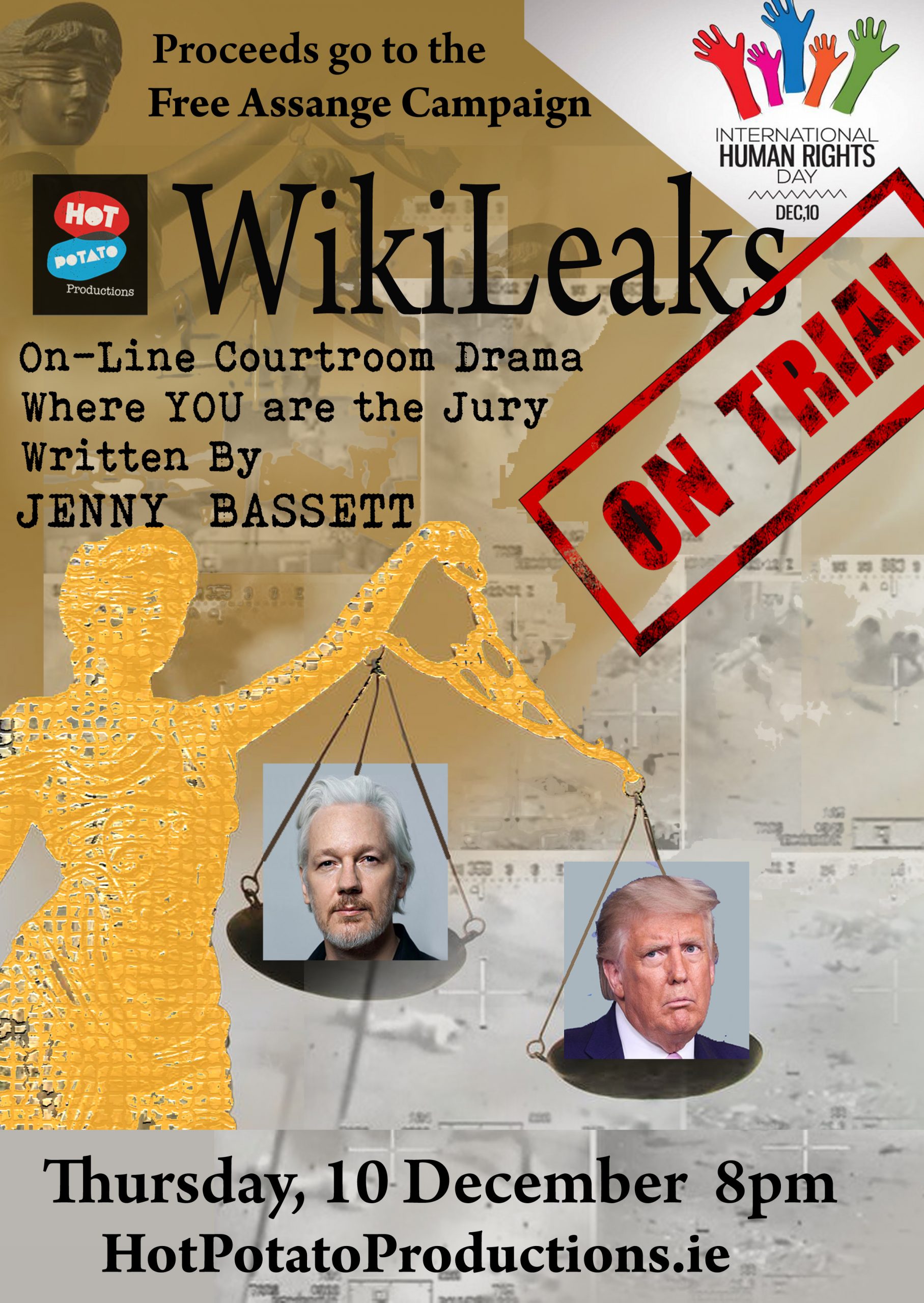 INTERNATIONAL HUMAN RIGHTS DAY
Thursday 10th December
WikiLeaks on Trial by Jenny Bassett
Thursday 10th December 8pm Irish time
Hot Potato Productions presents WikiLeaks on Trial by Jenny Bassett. Start time 8pm running time 1 hour 30 minutes.
Click on PayPal donations on our webpage and the zoom link will be emailed to you http://www.hotpotatoproductions.ie
All proceeds go to the Free Assange Campaign.
WikiLeaks on Trial is an online courtroom drama via Zoom, inspired by the current extradition case of the founder of WikiLeaks Julian Assange, where the audience are the People’s Jury.
“ Wikileaks on Trial is essential viewing for everyone concerned about attacks on our right to know what governments are doing in our name, this US extradition of Julian Assange seeks to criminalise investigational journalism” another participant said “ I really didn’t grasp the implications of Julian Assange’s extradition until I saw WikiLeaks on Trial I’d highly recommend seeing this “ Investigational Journalist John Pilger refers to Julian Assange’s extradition as the ‘ trial of the century’. Yet, NGO’S and MEP’s were denied access to the actual court hearing in London, Amnesty International has said the hearings themselves are “nothing short of a full-scale assault on the right to freedom of expression.”
Find out why this is cited as the ‘trial of the century’ and just what is at stake should Julian Assange be extradited by coming along to WikiLeaks on Trial.
Just to add….If you’re new to Zoom don’t worry, you’ll be guided by the Clerk of Court who is present throughout to assist you. First you will hear the case for the US Prosecution followed by the defence for Julian Assange. The Clerk of Court will then put you into break out rooms where you have the opportunity to discuss the case or listen to the debate before returning to the virtual Court. Using the polls you will give your verdict that will be delivered by the Clerk of Court.
During the performance, camera’s to be switched off and microphones muted until the Jury break out rooms. Should you wish to remain without your camera on that’s fine.
After the performance there will be a short Q&A.
PLEASE BE SURE TO GET YOUR TICKET BY 7.45 PM ( Irish tIme ) ON THURSDAY 10TH DECEMBER VIRTUAL COURTROOM DOORS OPEN AT 7.55PM
Actors include Patty Abozaglo, John M Farrell and Jenny Bassett
WikiLeaks on Trial received its on-line premiere as part of the National University of Ireland Galway Online Summer Festival in July, gave several performances as part of the Galway Online Fringe Festival in August, was the flagship presentation of County Clare’s Culture Night programme in September and was part of The Dublin Arts and Human Rights Online Festival in October.
#freeassangeireland #dontextraditeassange #courage #candles4assange
+ Google Calendar+ iCal Export