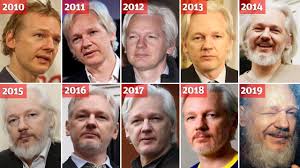 Essential Reading: . . . . click on the boxes below to expand.

Nils Melzer explains why he has changed his stance to support Julian Assange after extensive research uncovered so much
“In the end it finally dawned on me that I had been blinded by propaganda, and that Assange had been systematically slandered to divert attention from the crimes he exposed.” Link

And here is one of his United Nations reports
UN expert says “collective persecution” of Julian Assange must end now. Link.

Threats to media freedom and journalists’ security in Europe.
“. . .consider that the detention and criminal prosecution of Mr Julian Assange sets a dangerous precedent for journalists, and join the recommendation of the UN Special Rapporteur on Torture and Other Cruel, Inhuman or Degrading Treatment or Punishment who declared, on 1 November 2019, that Mr Assange’s extradition to the United States must be barred and that he must be promptly released;”
point 6.2 of resolution 2317 Link

Julian Assange’s potential extradition has human rights implications that reach far beyond his individual case. The indictment raises important questions about the protection of those that publish classified information in the public interest, including those that expose human rights violations. Link

“We, journalists and journalistic organizations around the globe, express our grave concern for Mr Assange’s wellbeing, for his continued detention and for the draconian espionage charges.

This case stands at the heart of the principle of free speech. If the US government can prosecute Mr Assange for publishing classified documents, it may clear the way for governments to prosecute journalists anywhere, an alarming precedent for freedom of the press worldwide. Also, the use of espionage charges against people publishing materials provided by whistleblowers is a first and should alarm every journalist and publisher.” Link

5.) Reporters Committee for the Freedom of the Press

6.) The European Federation of Journalists

“We believe that the arbitrary detention and criminal prosecution of Julian Assange set an extremely dangerous precedent for journalists, media actors and freedom of the press,” said EFJ General Secretary Ricardo Gutiérrez. The European Federation of Journalists submitted today an alert to the Council of Europe Platform for the Protection of Journalism and the Safety of Journalists and other Media Actors, in order to denounce the continued arbitrary detention and psychological torture of Julian Assange. Link

Let’s say it clearly, Julian Assange made a historic contribution to journalism. It was thanks to the organisation he founded, WikiLeaks, that major revelations by some of the world’s most prominent media outlets were possible. Assange’s extradition to the US would “threaten the work of all journalists” Link.

has renewed calls for the Australian and United Kingdom governments to oppose moves to extradite WikiLeaks founder and publisher to the United States to face trial on 18 espionage charges.

9.) How Wikileaks Keeps Its 100% Accuracy Record

Because WikiLeaks publishes the full leaked documents with names and locations (where relevant) redacted, and without editorialising, WikiLeaks has a 100% accuracy track record in reporting, this has been borne out by the number of challenges that have all proved WikiLeaks to be correct. This is hypervigilant journalism at its best.
Read Craig Murray’s endorsement of these facts Link

“@Doctors4Assange strongly condemns Wednesday’s (25-3-2020) decision by UK District Judge Vanessa Baraitser to deny bail to Julian Assange. Despite our prior unequivocal statement that Mr Assange is at increased risk of serious illness and death were he to contract coronavirus, and the evidence of medical experts” Link

End torture and medical neglect of Julian Assange
“. . . prompted to act following the harrowing eyewitness accounts of former UK diplomat Craig Murray and investigative journalist John Pilger, who described Assange’s deteriorated state at a case management hearing on Oct 21, 2019.
Assange had appeared at the hearing pale, underweight, aged and limping, and he had visibly struggled to recall basic information, focus his thoughts, and articulate his words. At the end of the hearing, he “told district judge Vanessa Baraitser that he had not understood what had happened in court” Link

By Dr Lissa Johnston, Ph.D.“ . . . Julian Assange’s exposure to such torture techniques, and the medical vulnerabilities caused, his life is currently at imminent risk from coronavirus infection in prison, where he is being held as an un-sentenced prisoner on remand” Link

“The International Bar Association’s Human Rights Institute (IBAHRI) condemns the reported mistreatment of Julian Assange during his United States extradition trial in February 2020, and urges the government of the United Kingdom to take action to protect him” Link

59 International Organizations Call Upon UN to Remedy Human Rights Violations in Pre-Charge Detention of Wikileaks Publisher Julian Assange
“According to the English report, signed by 16 organizations, “The methods employed by the prosecutor in Mr. Assange’s case are a clear violation of his fundamental human rights, yet they remain beyond the reach of judicial review.” Link

“All charges underpinning the US extradition request should be dropped to allow for Julian Assange’s prompt release. If the charges against him are not dropped, the UK authorities are under a clear and unequivocal obligation not to send him to the USA where he could suffer serious human rights violations. Julian Assange could face detention conditions in the USA that amount to torture and other ill-treatment, including prolonged solitary confinement. The risk of an unfair trial is very real given the targeted public campaign against him undertaken by US officials at the highest levels, which has severely undermined his right to be presumed innocent.” Read more via this link

Historian, Whistleblower and Human Rights activist. This website is a little unconventional to navigate.
You’ll have to scroll down the page to find “Your Man in the Public Gallery – Assange Hearing”. This will provide you with a concise first hand account of what the court proceedings have been like. Link
There are plenty of other articles that are of interest as well.

President, Pauline Wright, said “No matter what our personal views of Julian Assange may be, there are important matters of principle at stake that go beyond the personalities involved. We must condemn the decision of the United States to seek the extradition and prosecution of a non-citizen who published truthful information about US war crimes. This has clear implications for the protection of whistle-blowers into the future and the independence of the press.”

“What is to stop more authoritarian regimes claiming a similar right to prosecute Australians in the future, including journalists exposing war crimes or corruption? The Australian government should urge the United Kingdom to block Assange’s extradition to the United States.” Link