Answers to some of the most Frequently Asked Questions (FAQs). Click on the boxes below to expand for more detail.

The “hacking” language comes from a press release from the US prosecution office announcing Assange’s indictment on 11 April 2019.

The charge is that Julian Assange allegedly agreed to try to help Manning log into her work computers (which she already had access to) using a different username so that she could maintain her anonymity.”

Read the full FAQs in this link from Defend WikiLeaks for even more insights.

As a teenager Julian Assange and his friends hacked NASA, this was not to do damage but to test their skills at competing with some of the smartest brains on earth. In response Julian was offered computer coding and security jobs in various sectors, most of which he refused because he would not compromise his integrity. He did, however, take up a leading role in exposing two major paedophile rings with the Victorian and Australian Federal Police.

“Assange’s counsel, Grace Morgan, told the Victorian County Court that, “in 1993, when Mr Assange was in his early 20s, he provided assistance to investigators from the Victoria Police Child Exploitation Unit”.

“My client assisted in relation to two investigations,” she said. “His role was limited to providing technical advice and support, to assist in the prosecution of persons suspected of publishing and distributing child pornography on the internet. Mr Assange’s participation was concluded in the mid-90s. He is not aware of the ultimate outcomes of the operations but understands his technical expertise was of value to the investigations. Mr Assange received no personal benefit from his contribution, and was pleased to be in a position to assist.” Read more in this link.

Julian Assange built WikiLeaks with the same impeccable integrity he had as a youth. WikiLeaks is the only major media outlet with a 100% reporting accuracy record.

Julian Assange has threatened the multi trillion dollar military industrial complex by exposing the war crimes and war profiteering using the offenders’ own words and actions by publishing their leaked documents. And he has not been a hacker since his teenage youth, and even then he did no damage.

2.) Skipped Bail ? . . . . . . Julian sought and was given political asylum in the Ecuadorian embassy because he was in very real danger of being extradited via Sweden to face the US Secret Grand Jury has now proved to be true.

It is also worth noting that the UK violated international laws and protocols by not allowing him to leave the embassy via a diplomatic car to the airport.

3.) Being given Justice ? . . . . . . . The UK is further flouting international laws and conventions by holding him in solitary confinement at Belmarsh Prison. Assange has only 2 visits per month, and that includes all his legal representatives, family and friends’ visits.

The UK is preventing him from building his own defence, and not even allowing him any reading materials. And now at time of writing he is even being denied access to the courts, with his hearing being held without him present, even online.

UN expert on torture sounds alarm again that Julian Assange’s life may be at risk.

The Australian Government worked at Diplomatic levels and head of state levels to secure the release of fellow journalists James Ricketson from Cambodia and Peter Greste from Egypt. Yet to provide only minimal consular assistance to Assange reeks of colonialist bias.

Ret. Brig. Gen. Robert Carr testified that his task force identified more than 900 Afghan names as potentially at risk in the 70,000-plus leaked files.

Carr reported there hadn’t been a “single case of Afghans needing protection or to be moved because of the leak.” Gates wrote. “. . . the review to date has not revealed any sensitive intelligence sources and methods compromised by the disclosure.” And none since.

Former Défense Secretary Robert Gates said to US Congress that the reactions to the leaks were “significantly overwrought.” He went on to say: “Is this embarrassing? Yes. Is it awkward? Yes. Consequences for U.S. foreign policy? I think fairly modest.’’ Cablegate (diplomatic leaks)
“However, the review to date has not revealed any sensitive intelligence sources and methods compromised by the disclosure.” Afghan War Logs

It is also worth noting that with Mark Davis’ revelations, it was Assange who meticulously redacted all the names from the media releases, not the New York Times, nor The Guardian.

Manning leak did not result in deaths by enemy forces, court hears.

Also of note is that it was a book by 2 Guardian journalists that initially issued the passphrase to the cache of war logs etc, not Assange.

It was the US Electoral College that overturned the popular vote, by the widest margin ever.

Here is the final popular vote count of the US 2016 election.

It is true that WikiLeaks published materials which exposed lies and corruption within the DNC and the Clinton campaign, as they have on many issues. As a publisher, WikiLeaks’ remit is to publish verified leaks that are in the public interest to have out in the open: knowledge of the internal machinations of one of the major political parties in the most powerful country on Earth is surely in the public interest.

6.) Face the charges in Sweden ? . . . . . . . There were no charges. When he did face the initial allegations in court, he was found to have no case to answer, and allowed to leave Sweden.

Swedish prosecutor Marianne Nye reopened the case for political reasons. Assange offered to be interviewed in Sweden if they assured him he would not be extradited to the US. They refused.

Assange then offered to be interviewed in either the Swedish embassy in London or at Scotland Yard. The prosecutor refused.

European Union law has since changed so a prosecutor can no longer issue a European arrest warrant. The Swedish court system was so embarrassed by this, they forced the prosecutor to interview Assange in the Ecuadorian Embassy.  Again he was found to have no case to answer.

It is also worth noting, that when Swedish authorities decide someone has been raped, that person is assigned legal representation and legal media representation, whether they like it or not.

Claes Börgstom nominated himself and was assigned to represent the women in question (Anne Ardin & SW).
Claes Börgstrom, Marianne Nye, Anne Ardin and the police woman who interviewed AA & SW all stood united on the same political platform for the elections at the time.

Claes Börgstom’s lawyer business partner at Börgstrom & Bödstrom, Karl (AKA Edward) Bödstrom was an intermediary between Karl Rove and the then Swedish Prime Minister Fredrik Reinfeldt

Karl Rove (US war criminal who can’t enter Europe for fear of being charged with war crimes) was in turn an adviser to the then Swedish Prime Minister, Fredrickson.

SW, has refused to sign any of the documents. SW stated she was not raped. It is her consent that has been violated by these vested interests for 10 years.

The persecution of Julian Assange is not feminist, it’s political. Felicity Ruby

8.) 'Debunking All The Assange Smears' by Caitlin Johnstone

Caitlin Johnstone offers an in depth set of arguments on How to argue against Assange smears Link.

9.) The closing arguments from Julian's Defence team at the recent #AssangeCase.

At 252 pages, it lists details to counter the US Govt’s spin against Julian #Assange, and what that all means to media freedoms in the future.
Read through, highlight points of interest and make them social media squares to go with this link 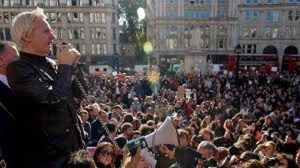